When you buy stuff using my links, I may earn a commission. Learn more >

There’s nothing quite like the rush of the hunt as you stalk moose, deer, and other big game. And the best part is that you can do it sitting at home. But what are the best hunting video games available?

Way Of The Hunter is currently the best realistic hunting game overall. It was released in 2022 and is available on PlayStation 5, Xbox Series X and Series S, and Microsoft Windows. 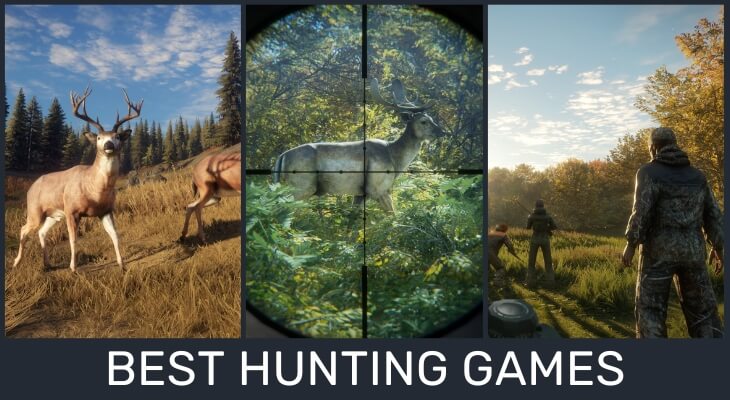 Are realistic graphics important to you, or do you prefer a cartoony style? Unfortunately, there is a lack of newer realistic hunting games to choose from. So, you will have to decide if you want an open world to explore or smaller levels with more directed gameplay.

While this hunting game list is small, I think I’ve found a bit of everything that’ll test your skills or just give you the freedom to take a leisurely stroll through the woods and enjoy the wildlife.

Way Of The Hunter

Finally, a new realistic hunting simulator has made its way to gamers. Compared to everything else on this list, Way Of The Hunter has better physics, animal behavior, and trophy system, and the graphics are unreal. Literally, Unreal Engine 4.0.

2 large maps allow you to pull off a successful hunt no matter which type game animal you’re after. There are no problems with replayability as the animals you stalk are quite realistic with their movements and migration patterns.

The game isn’t perfect. Your character movements and the sounds in the game just don’t feel as good as they do in Call Of The Wild. However, you probably won’t notice the difference if you haven’t played much of the other game.

If you’re playing on PC, you should aim to have better than system requirements, or you may end up feeling the lower frame rates and possibly stuttering which could ruin your mood during your hunt.

This game is available on PS 5, Xbox Series X/S, and PC.

theHunter: Call of the Wild

Before Way Of The Hunter, theHunter COTW was previously my favorite because, at the time, it was one of the best-looking and most realistic hunting games with a fully open world spanning 80 square km.

The lush and green region provides a lot of variety, including thick forests, wide open clearings, hills, and mountains, with various kinds of bears, deer, foxes, and more to hunt.

To facilitate quicker traveling, you can ride an ATV. While it’s loud and can attract animals, it is an effective getaway method in case an overly aggressive animal attack happens.

The game also features multiplayer with up to 8 players, where you can take up various hunting challenges in either a co-op or competitive fashion.

This game is available on PC, PS4, and Xbox One.

Hunting Simulator 2 came out in 2020 and gave you a solo adventure in several regions, such as the Texan desert, the forests of Colorado, and even locations in Europe. The game has over 160 items and weapons to choose from and includes 33 different kinds of animals.

The game features licensed Browning and Winchester firearms, various callings, lures, and other modern equipment. It even includes a drone that you can use to explore your surroundings from the air.

As for the types of animals to hunt, there are a lot of variations unique to each region. These usually include deer and various predators such as wolves and bears, but also include more unique animals like crocodiles and bison.

Hunting Simulator 2 tries to capture the hearts of true hunting enthusiasts but still falls a bit short overall. However, I think it’s a great option for console gamers.

Unlike theHunter, this game features much smaller and more focused linear areas to hunt in. Three U.S. states are featured in the game (Texas, Colorado, and Alaska), and each has three trophy animals to hunt and one kind of predator to avoid in each region.

Gun variety is very important in this game, and each of them has specific uses. For example, shotguns are neglected in other hunting games, but in Deer Hunter Reloaded, you have to use them to take out attacking predators such as bears, wolves, and mountain lions.

This game is pretty bare-bones in terms of content. It is single-player only, and the three regions have fairly linear missions. However, if you don’t enjoy fully open-world games and don’t mind the game being a bit rough around the edges, give Deer Hunter Reloaded a try.

This game is available on PC, PS4, Xbox One, and iOS.

The once popular and renowned Cabela’s hunting game series made a return with Cabela’s Big Game Hunter: Pro Hunts in 2014.

It is single-player only and is said to be quite repetitive, but I think that can be said about any hunter game. Again, the world is not fully open in Story mode.

There are 3 additional game modes:

This game may be a good choice for the hunting subgenre if you have an older system.

This is an older game, released in 2010, but it might be a fun choice if you have access to those systems.

On the Wii, you can use your Wiimote for targeting. It’s nice, but some versions of the game also ship with a gun attachment for it, resulting in a more authentic control scheme.

As for the gameplay, you select your (pretty basic) equipment and then embark on missions in various areas to hunt animals.

There are fewer animals than in other games, the two most prominent being deer and duck.

I would only recommend this game if you have a Wii and can also use the gun controller – otherwise, Cabela’s Pro Hunts is a better choice for older consoles.

Have you played the old Duck Hunt game on the original NES? You know the one where you had to point a laser gun at your TV to shoot ducks?

If so, Duck Season might be a great nostalgia trip for you with lots of ’80s references.

However, unlike the other previously mentioned games, this one is short and horror-like. It has a scary story about a young boy playing a console game eerily similar to Duck Hunt in the ’80s but with very modern graphics.

This game is for PC and supports the Oculus Rift and HTC Vive headsets, taking you right into the action.

Another entry in the famous Cabela’s series, African Adventures, takes place in seven different regions on the continent of Africa.

As the name suggests, this is not a hunting simulator because it plays more like an action-adventure game but against various kinds of African wildlife.

You will fight hyenas, elephants, buffalo, lions, leopards, and other signature animals from the African savannah.

Apart from the single-player campaign, which takes about 6 hours, you can play a single or 2-player rail-shooter mode, which aims to shoot animals like crazy.

This game is very light on content and hunting mechanics. However, this game may be fine for a few hours if you’re just looking to shoot animals instead of people or robots.

This game was originally available on PS2 and Xbox 360, but the remastered version that came out in 2014 is for Xbox One and PS4.

BONE is the creator of this gaming review blog and spends much of his free time playing the latest games on PC. He's also a computer enthusiast who loves new hardware. Eating cashews and drinking coffee helps him get by during long play sessions.

GAMINGwithBONE reviews video games and recommends the latest gear and equipment to help you improve your gaming experience.

Affiliate Disclosure:
As an Amazon Associate I earn from qualifying purchases. Read more about how I earn money.